On March 29, 2017, someone from Whitecap Resources in Calgary provided a letter they’d received from Brad Wall to the Canadian Press.  That letter was an advertisement of what benefits would be awaiting Whitecap Resources should they decide to pack up their Calgary operations and relocate to Saskatchewan.  While some considered it standard poaching, others suggested it could also be a breach of current trade agreements. 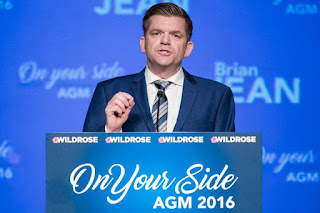 Obviously, there are those of us in Alberta who are not exactly thrilled with the idea that our neighbour is attempting to steal Alberta jobs but some of us weren’t exactly Wall fans to begin with.  What about people who were Wall fans?  The ones who peppered their commentary with adulation for “Alberta’s Other Premier“?  Well, they’re still on his side. Why shouldn’t they be?

If Alberta-based companies pick up and move to Saskatchewan, the official opposition will have the one thing they don’t have yet: evidence.  Certainly, there have been job losses in Alberta from an oil free-fall but that happened in Saskatchewan and Newfoundland as well; under a Conservative and Liberal government, respectively.  What the official opposition desperately needs is evidence but what Alberta needs is someone who has our back here at home.

Instead of defending Alberta jobs while in Saskatchewan on Mar. 31, 2017, Prasad Panda, MLA for Calgary-Foothills blamed Notley for attacking “everyone (in Alberta) with tax increases” (though he didn’t mention Premier Wall’s recent tax increase).  In a video posted to Facebook last week, Brian Jean says he doesn’t “want to tolerate other provinces being a better place to invest than Alberta” (but apparently, he will).  Even during question period today, Derek Fildebrandt said that although he thinks Brad Wall violated the New West Partnership agreement, he wonders if the NDP didn’t start the fight by imposing increased rates on imported beer. Those are just the recent comments but this anti-Alberta behaviour has been going on for months.

Contrary to this Wildrose narrative, Alberta’s corporate tax structure, lack of a PST and lower personal income taxes still make it a better place to invest for businesses. The Wildrose seem to be firmly against encouraging business to stay, doing almost as good a job recommending that businesses seek greener pastures as Brad Wall.

Back in June of 2016, Wall was already on his business development tour of Alberta speaking to the Calgary Petroleum Club members.  In tough times, I’m all for having a hero but I think it’s time the Wildrose stop cheerleading for Brad Wall and start supporting those who should really matter to a party vying for government: Albertans.
Please follow and like us: