An injunction was requested in the case of Parents, Independent and Religious Schools v. Alberta Minister of Education heard by The Court of Queen’s Bench in Medicine Hat today.  There was a lone supporter outside of the courthouse with a sign that read “GSAs Save Lives”.  Inside, the courtroom with 50 seats was full and there were more than 60 people milling in the lobby outside of Courtroom 3.  Many of them were wearing “Include Parents” buttons.

“There are protesters outside” one gentleman said “and the media is here.  We should go out there so they can see there’s support for this.”  No one mentioned there was only one person pacing on the steps.  “We should have a spokesperson if the media asks to talk to us” a woman suggested.  “They can talk to me” the gentleman responded “my name’s Jeremy Williamson.”  And then they held a short prayer.

Another gentleman asked Mr. Williamson what his role was. He started Concerned Parents of School District 76 but, “it’s bigger than that” he told the small crowd.  The Facebook group has almost 500 members. One woman, in conversation with another, explained why the case was being heard in Medicine Hat; “people wouldn’t pay $25 to park in downtown Calgary and then sit in a courtroom all day.  Rural people show up” she said.

According to the Justice Centre for Constitutional Freedoms (JCCF) website, the challenge claims that:

“Bill 24 threatens faith-based schools by attacking the freedom of these schools to create safe and welcoming learning environments while also respecting their unique religious characters, and by preventing schools from being open and transparent with parents.”

John Carpay, President of JCCF, religious freedom advocate, and “ally” of Jason Kenney has been the loudest voice for the challenge.  The JCCF maintains the application was made “on behalf of a coalition of parents and independent schools” (read more about  JCCF’s cases and advocacy).

2.(a) freedom of conscience and religion;

(b) freedom of thought, belief, opinion and expression, including freedom of the press and other media of communication and;

Outside, the lone picketer was having a difficult discussion with one of the proponents of the challenge.  “It’s not a choice!” He said in an exasperated, and raised, voice.  “When did you decide you were heterosexual?!” The woman he was shouting at walked away saying he didn’t answer her question.   As I passed him after he resumed his route, I thanked him for being there.  He wasn’t alone. 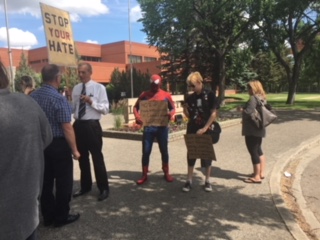 More supporters showed up near lunch.  One spoke first with the picketer and asked if he would mind if she stood with him.  He accepted her offer before he was called away to do an interview.  She identified herself as a Christian and said she had difficulty with understanding support for the challenge.  “Some kids really need this kind of support” she said.

When the courtroom broke for lunch there was an opportunity to line up for re-entry.  It’s strange standing within a group of people who would disagree with everything you believe as a parent; like your kids have every right to be who they are going to be.  They have normal conversations; they joke, they laugh.  They refuse to believe there are gay children in their schools because the bible says it’s against God’s will.  They believe their will is stronger than the fear and self-doubt children feel when they think they aren’t “normal”.

The respondents on behalf of the Government spoke first in the afternoon.  Their focus was on the children who would benefit from GSAs.  Their representative was soft-spoken and the room was intensely quiet.

He took an hour to present the Government’s case.  “The premise of the School Act” he said, was “enabling legislation. It is up to the community to set the parameters.”  He said the school community, including parents and anyone else the school chose, are the ones responsible for building the program, should one be requested.  The parent’s rights advocates could be the ones creating the entire program; setting the parameters, choosing the material and the facilitator.  It could be up to them if they would take the initiative. 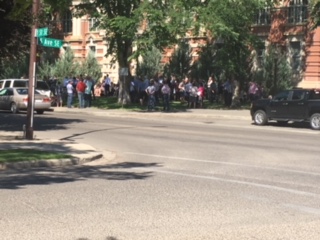 The focus of the applicants is parents and the schools themselves, and there is no relief for students, regardless of age, to ask for, let alone have access to, a Gay-Straight Alliance in the JCCF’s claim. The applicant is not arguing for (and seemed loathe to mention) children’s rights.  This case is about the parents and their freedom of religion. The schools, according to claim 37 maintain the following beliefs:

a. That people are created as male and female, and that God intends for people to accept their gender;

b. That individuals cannot truly or actually change their gender or sex;

c. That marriage is the union of one man and one woman, for life, to the exclusion of all others, and so instituted by God;

d. That sexual relations are intended only for within marriage;

e. That departure from the above principles of God’s expressed will is morally wrong (collectively, the “Beliefs”).

The respondent brought up the recent case of Trinity Western where the Supreme Court of Canada decided it was reasonable to limit freedom of religious expression to ensure LGBTQ rights.  The Calgary Sexual Health Centre had intervener status and offered the following: “children don’t generally get a choice in which school they attend”. The school a child attends is based on three things; geography, finances and parent’s choice.” When the Judge asked the applicant if the Trinity Western decision was relevant to the application, the representative said it was not because adults attend Trinity and this case is about “five year-old kids” and the government attempting to “compel compliance”.

Behind me, a woman asked someone else if we would know today.  A gentleman responded that it would go through review and be back in the courts; “this is just the beginning” he said.

The applicant finished his response saying the proposed legislation “stripped the parents of the ability to educate, care, comfort and guide” their children.  As a religiously questioning parent of four children in the Catholic school system, that statement indicates the entire issue; the applicant is unreasonably extending the legislation to affect parents.  No amount of Catholic education strips me of my ability to educate, care, comfort or guide my children.  But I know where I stand.  I stand with LGBTQ and questioning youth. One. Hundred. Percent.

“You don’t have to change a thing; the world could change it’s heart” Scars to Beautiful, Alessia Cara

Update June 27, 2018, the injunction sought in this case has been denied.

NOTICE: This article is a mixture of both opinion and fact. Links within the article to supporting evidence.