Premier Notley is between a rock and a hard place for the next seven days. Her decision to forego attendance at the Western Premier’s Conference this week “to focus on the pipeline” has received mixed reviews.  Kenney, whose caucus has run and hid from the Legislature an incredible 12 times this year to avoid debates on Bill 9, the “bubble zone” legislation, accused the Premier of “hiding” from BC Premier Horgan.  Others said she was doing the right thing by focusing on priorities for the province first.  You can’t please everyone, especially when they don’t seem to know what they want. 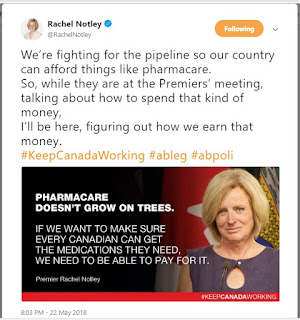 After originally claiming to support taxpayer dollars being used to invest in the Trans Mountain Expansion, Kenney has changed his position.  As leader of the Opposition with literally no ability to actually make decisions (or be involved in discussions), he can say whatever he wants; no matter how inconsistent. But perhaps it was the less than subtle jibe from his former caucus mate, Michelle Rempel that made him realize the error of his ways.

Official communications from the Premier’s office have stated that the Premier’s focus is on Kinder Morgan and Trans Mountain, but one article claims to have an inside scoop on the *real* reason for her decision: BC would not agree to a pre-written communique regarding market access for resources.  According to the article, the Premier announced she would not attend the conference afterward.

With only a week left until the Kinder Morgan deadline, BC’s reference case is still before the court.  After unanimous approval of Bill 12, which gives the Minister of Energy final say on what flows through the Trans Mountain pipeline, BC filed a statement of claim against the legislation.  Currently, the pipeline carries multiple products to BC including diluted bitumen, fuel and diesel fuel.

One suggestion was that Bill 12 would give the Government of Alberta power to stop all fuel shipments through the pipeline and increase the amount of oil shipped instead.  Shipping products by rail and truck are both slower and more expensive and would likely further increase fuel costs in BC without “turning off the taps” (which would be unconstitutional).

Regardless of whether the Official Opposition agrees with the Government’s actions, their impotence is not necessarily a bad thing.  While Kenney has claimed the Premier is simply following his “lead”, he has the enviable ability to pretend otherwise if it benefits him.  In Alberta these days, there seems to be more people willing to throw the entire province under the bus if it’s not going to be led by conservatives.